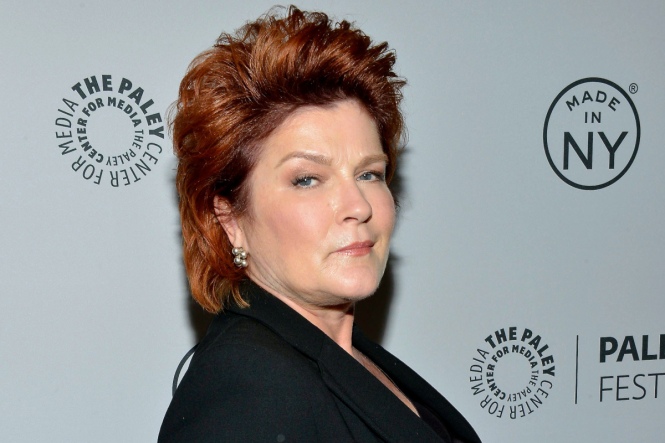 The memoir encompasses her experiences of being raped in her Manhattan apartment hallway at age 22, giving up the daughter conceived in this transgression, and being advised by Richard Burton to “[g]et the f— out [of show business] before it’s too late.”

Mulgrew states that “it’s freeing” playing Red because she is “no longer cast for my sexuality or physical charisma.”

When questioned about plastic surgery:

Is it hard to let go of your beauty? Yes, very. I was pretty, so it’s tough. But why would I put a knife to my face and think that’s going to reverse time?

This article is featured in Entertainment Weekly, April 10, 2015.

We Asked: Which OITNB cast member’s favorite book is The Hobbit by J. R. R. Tolkien?

The answer will be revealed tomorrow.

We Asked: Which OITNB cast member won an award for her portrayal of Katharine Hepburn?

ANSWER: Kate Mulgrew (Gallina ‘Red’ Reznikov) won the award for Best Actress at the 29th annual Carbonell Awards for her portrayal of Katharine Hepburn in “Tea at Five”. (IMDb)

Which OITNB cast member won an award for her portrayal of Katharine Hepburn?

The answer will be revealed tomorrow.

Literary Litchfield is tapping on the glass of Litchfield’s fishbowl.

Don't forget to follow so you never miss any of the prison gossip!