Joel Luschek (portrayed by Matt Peters) is the head of the electrical department at Litchfield Penitentiary. While he is a prison staff member, he has been known to take part in shady and illegal activities as well as bring contraband onto the premises. He is also known to regard the prisoners like animals and even call them “poochies.”

In season one, Joel starts up a relationship with C.O. Susan Fischer, much to Joe Caputo‘s dismay. However, his Schnapps-spiked hot chocolates and lackadaisical habit of not texting her back frequently enough drives her to dump him.

In season three, Joel is approached by Nicky Nichols to help her traffic Vee’s left-behind heroin out of Litchfield for an eighty-percent cut, which leads to a strained and tense relationship between the two, especially when Joel pretends to march her down to the SHU. However, when Leanne Taylor and Angie Rice find their stash and use it all, the two tip-off the guards to drugs being smuggled into the prison. The investigation inevitably leads to a search of Luschek’s desk and him ultimately turning Nicky in, and she is promptly taken to the SHU. 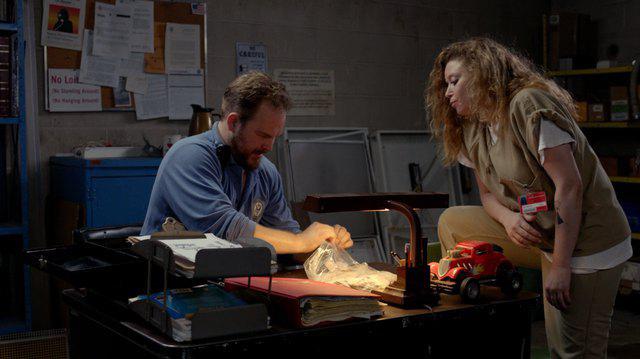 Shortly after Nicky’s demise, Luschek is approached by the government for permission to access to his land, which is apparently rich in oil, which thus makes him rich in cash but poor in concern for his job at Litchfield. This complacent attitude prevents him from stirring up trouble by joining the union. His attitude also prevents him from even trying to stop the stampede of inmates running to the hole in the fence.

Luschek continues to be negligent and careless in season 4, and he’s pictured drinking and getting high before his shifts. Whether or not it’s just him being overall careless or if he’s dealing with the guilt of having sent Nicky to Max and causing her to use drugs again, he seems to be caring less and less about his job by the second. In his first attempt to alleviate his guilt, he visits her down in Max, but she doesn’t want to hear his apologies. Unfortunately, Judy King listens and gets Nicky out but turns him into her boy-toy, forcing him to do her bidding. King even gets him into an awkward threesome while high on Molly with Yoga Jones.

Once Nicky is released from Max, she teases him about being in love with her. He doesn’t say anything in return, though, which suggests that it is true.