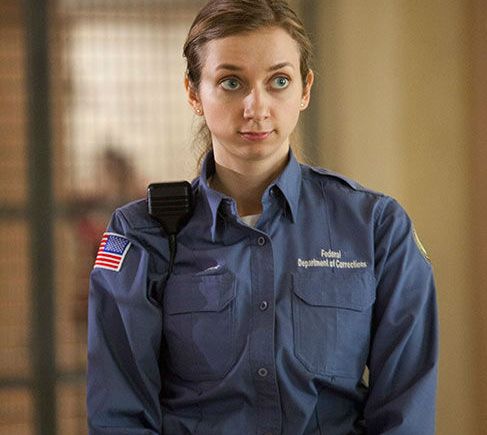 Susan Fischer (portrayed by Lauren Lapkus) is a correctional officer who is hired just after the cell phone/prison porn incident. As a female guard, her superiors demean and patronize her (especially Joe Caputo). Unlike any other correctional officer, she sees herself as an equal to the prisoners. She tells Piper that “the only difference between you and I is that you got caught for all the bad stuff you did.” She is quiet and polite, which makes her the perfect stomping ground for the men in charge, as well as the prisoners. She lacks conviction and is caught letting Sister Ingalls get away with sneaking food out of the cafeteria.

Joe Caputo instructs her to call the women “inmate” so as to dehumanize them. He tells her to not think of them as people, despite her inclinations. In effort to come down harder on the women, she interrupts the “moment” between Janae Watson and Yoga Jones when the latter was telling her story of incarceration and alcoholism. She comes down even harder on Miss Claudette when she returns from her appeal hearing, which was turned down, which provokes Miss Claudette to choke her.

We learn that Caputo’s patronization toward Susan is because he is romantically interested in her, which swiftly gets shot out of the water when she brings her boyfriend, Stephen, to the Litchfield Prison Christmas Pageant. Upon the start of season two, however, Stephen is long gone and Susan begins dating Joel Luschek, the head of electrical at Litchfield. Caputo discovers this, unfortunately, after inviting Susan to come see him play in his band. He does not realize, however, that she has invited C.O.s Bell and O’Neill, along with Luschek, to join her. His attempt at a date didn’t go as well as planned.

Although she is kind, she is a bit clueless; in Nicky Nichols and Big Boo‘s “fuck off,” Nicky flirts with her in attempt to score a ten-pointer. It is in the conversation with Nicky that she comes up with the idea to spot-check the phone calls that are recorded to look for suspicious activity; upon telling Caputo this idea, he is hesitant about it until he discovers that Fischer speaks Spanish fluently, thus making her a good person for the job. It is during this time that she discovers that Daya Diaz is pregnant; however, Fischer is fired before she can even tell Caputo the news.

Fischer has always been a more sympathetic guard, and Caputo comes down on her hard; instead of a five-shot quota that everyone else has, she has a six-shot quota. When discussing how unfair the shot-quota is, on top of the mounds of paperwork it causes, Caputo walks in on the COs. Fischer is the one to stand up to him about it, and she is subsequently fired from Litchfield.

After being fired, she catches Nicky smoking in the chapel, but she doesn’t bust her for she doesn’t “care anymore.” Nicky tries to comfort her, saying that being fired “reflects highly on you” because “you’re a decent human being.”